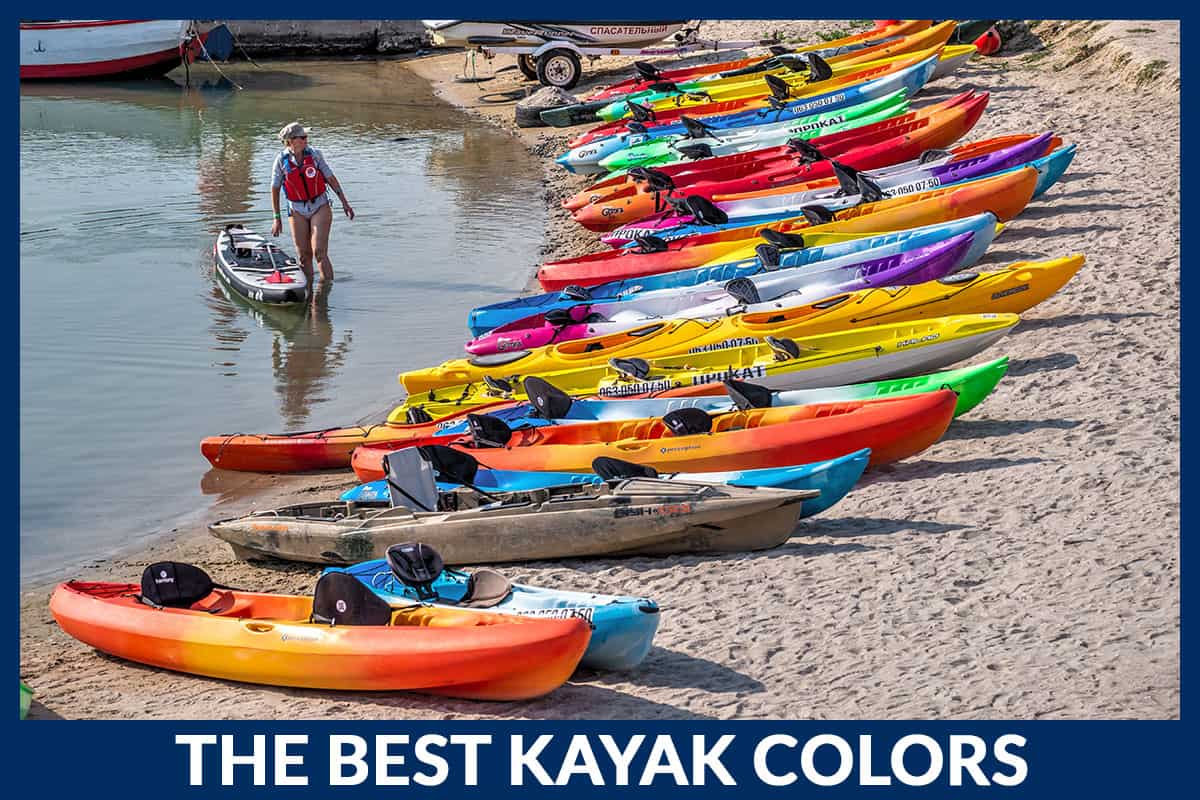 My first kayak was camo-colored blue, green and purple. I just bought what was available, giving no thought to what the best color for a kayak was. At that time, I didn’t think about whether kayak color even mattered for safety or visibility or fishing for that matter. And more importantly, a question I would’ve asked had I known, can a particular kayak color attract sharks more than another colored kayak would?

After years of paddling and several kayaks bought and sold, I’ve learned that for visibility, fishing, and even sharks, the color of your kayak may matter more than you think. But choosing the “best” kayak color is not as simple as buying the most visible color for your kayak. So, after all that experience and a bunch more research, I’ve boiled down the best kayak colors for the most common situations, locations, and conditions.

So, what is the best kayak color? The best overall kayak color is fluorescent green. Fluorescent green-colored kayaks are easier to see under most kayaking conditions and in most lighting situations. For visibility and safety, other great kayak color choices are yellow, orange, and a shade of blue best described as robin egg blue.

Your primary concern while paddling should be kayak safety. Being so low on the water makes you and your kayak difficult to see in even optimal conditions. This makes it easy for boats and personal watercraft, zipping around on the water, to completely miss seeing you and potentially run you over.

Also, you must rely on being seen to avoid collisions. Because it’s difficult for even a fast paddler to outmaneuver a boat or jet ski that’s traveling too fast, not paying attention, or worse, is being driven by someone under the influence of alcohol or drugs.

And in a boat-on-kayak or PWC-on-kayak collision, you and your kayak don’t have enough mass or speed to come out on the better end of things.

No kayak color can completely protect you while you’re out paddling, but there is a color that will make you feel a bit safer from being run over while you’re kayaking. This may seem repetitive, but the “best” kayak color from a safety perspective is the same as the overall best kayak color.

There are several factors that go into finding the safest color kayak. Those factors are:

If you’re in the Bahamas, Florida, or Baja Mexico where the water’s a beautiful light teal or a light green-blue you might not want any shade of green or blue-colored kayak, especially if there’s any danger of you capsizing and needing to be rescued.

At dawn and dusk, certain colors that are more visible during the sunny part of the day become almost invisible. A red kayak will blend into the darkening sea much faster than a yellow, orange or fluorescent green kayak will. And while a black kayak may stand out against lighter-colored waters during the day, at dusk and in cloud-covered conditions a black color kayak will quickly become part of the background.

In bright sun on calm and clear water and in dark waters, white kayaks will stand out almost as well as a fluorescent-green colored kayak one simply by contrast alone. But in rough water that same white-colored kayak will quickly blend into the whitecaps.

As an added note, beware of kayaks that have a great colored deck but are all white on the bottom. Why? If you’re in need of rescue at sea or on a rough lake, chances are it’s because of wind or bad weather conditions. And it’ll be very likely that those conditions caused you to capsize. As you cling to the underside of your kayak, bobbing about in the whitecaps, your upside down, white-bottomed kayak will look like just another wind-swept whitecap to potential rescuers.

So make sure that you think about the bottom color of your kayak also, because in an emergency situation you will want it to be just as visible as the deck of your kayak. In fact, it may be more important for rescue since capsizing would be one of the most important times for rescuers to be able to find you easily and quickly.

And to be found on the water and particularly in the ocean, visibility is the most important factor in rescue.

Visibility is not only dependent on kayak color, but contrast with your kayak’s surroundings is just as important. Mustang Survival did a study on the best kayak colors and also the importance of contrast and how humans see and recognize objects and color. They found that indeed our fluorescent green is the most visible color but also some interesting things about the contrast of other colors like orange, yellow, and red.

A thick, heavy fog is probably worse than night darkness for kayakers wishing to be seen and avoid colliding with boats. Not only is heavy fog harder to see through than darkness, but most people overestimate their ability to be able to see and react during daytime fog than they would in clear skies at night. Boaters and personal watercraft operators will slow down more at night, but maybe not as much during heavy or intermittent daytime fog. This is because even heavy fog in daylight gives us the perception that we can see better than in darkness, but that isn’t always necessarily true.

What color kayak is most visible? The most visible colored kayak on the water or in fog and dim light is fluorescent green. According to the United States Coast Guard, when viewed side by side with other colors, especially at distance and in low light, fluorescent green is slightly more visible than yellow or even orange.

Kayak Color Visibility From Easy to Difficult to Spot

After reading a ton of articles and researching the USCG findings on color and the Mustang Survival gear’s own research on color, here’s a practical list of kayak colors ranked by visibility:

Fluorescent green has overtaken orange as the ocean and jobsite’s safety color of choice. So it’s only natural that fluorescent green is now seen as the best kayak color choice from a pure visibility and safety standpoint.

But let’s back up a second. We need to talk a little about contrast. Why does a black kayak stand out so well on flat calm water? And why do other colored kayaks like yellow kayaks stand out from their surroundings seemingly just as well as our electric green favorite? The answer to that lies in contrast and how the human brain sees objects that are dissimilar to their surroundings.

For instance, if you were kayaking in winter and the shores of the lake were covered in snow, a red colored kayak might stand out even more than a fluorescent green one or an orange one. It might do at least just as well as those kayak colors due to the pure white surroundings creating the contrast that grabs an observer’s attention.

There’s little evidence or study on the effect that a kayak color has on fish. There doesn’t seem to be any correlation to color and whether you catch more or less fish because of it. It’s more likely that the shadow of your kayak from above can appear like a predator to fish swimming below your kayak. Also, any quick movement or splashing with your paddles would be more likely to scare away fish.

However, there’s ample reason to worry about being run over by motorboats while you are kayak fishing. Especially if you’ve chosen a camo blue, gray, or dark green fishing kayak color. Because while camo kayaks that blend into the water and shore are very popular with kayak fishing enthusiasts, they don’t prevent fish from being scared away or not. However, a dark camo kayak that blends in is much harder for boats to spot and avoid you.

This problem is compounded by the fact that kayak fishing is mostly stationary and without the movement and flashing of your paddles as you paddle, you are that much less likely to be seen.

Speaking of fishing, what about sharks? Because none of us wants to have our kayak color be more attractive to sharks, right!

What color kayaks attract sharks? Sharks aren’t attracted to kayak color. They are likely more attracted to contrast between kayak color and its backgrounds. From below, a kayak with a high contrast silhouette looks like a shark’s favorite prey, the elephant seal. This is likely the cause of most mistaken shark attacks on kayaks.

Most of the documented attacks by sharks on kayaks seemed to be a case of mistaken identity more than being attracted to a particular color kayak. However, that’s small consolation to the kayakers who were on the wrong side of a shark “accidentally” biting their kayak, whether the shark thought they were a seal or not.

Better precautions to take if you believe that sharks may be in the area where you are kayaking is don’t dangle limbs over the side of your kayak, splash the water with your paddle, or in the case of fishing, drag blood-dripping fish alongside your kayak while you continue to fish

What is the Most Popular Kayak Color?

The most popular kayak color is the classic yellow-colored kayak. Yellow was one of the first bright colors ever made for kayaks and it’s still the most widely used by kayak rental companies and kayak enthusiasts alike.

The color of your kayak matters in certain situations such as safety and visibility. But your kayak’s color hasn’t been proven to make a difference if you’re worried about scaring away fish or accidentally attracting sharks to your kayak.

So if you just want to go out on the water and have fun and you aren’t worried about visibility or safety, buy whatever color kayak you like (there’s a lot of options). But if you are concerned about safety and visibility while you are kayaking (and you should be) the best color kayak to buy is fluorescent green followed by orange, yellow, and red or robin’s egg blue.

link to Kayaks And Sharks: Attraction And Attacks

If you kayak enough times in the ocean, sooner or later you’ll wonder if a shark is lurking behind or beneath your kayak. Sharks cause more fear than any other animal you might run into while...