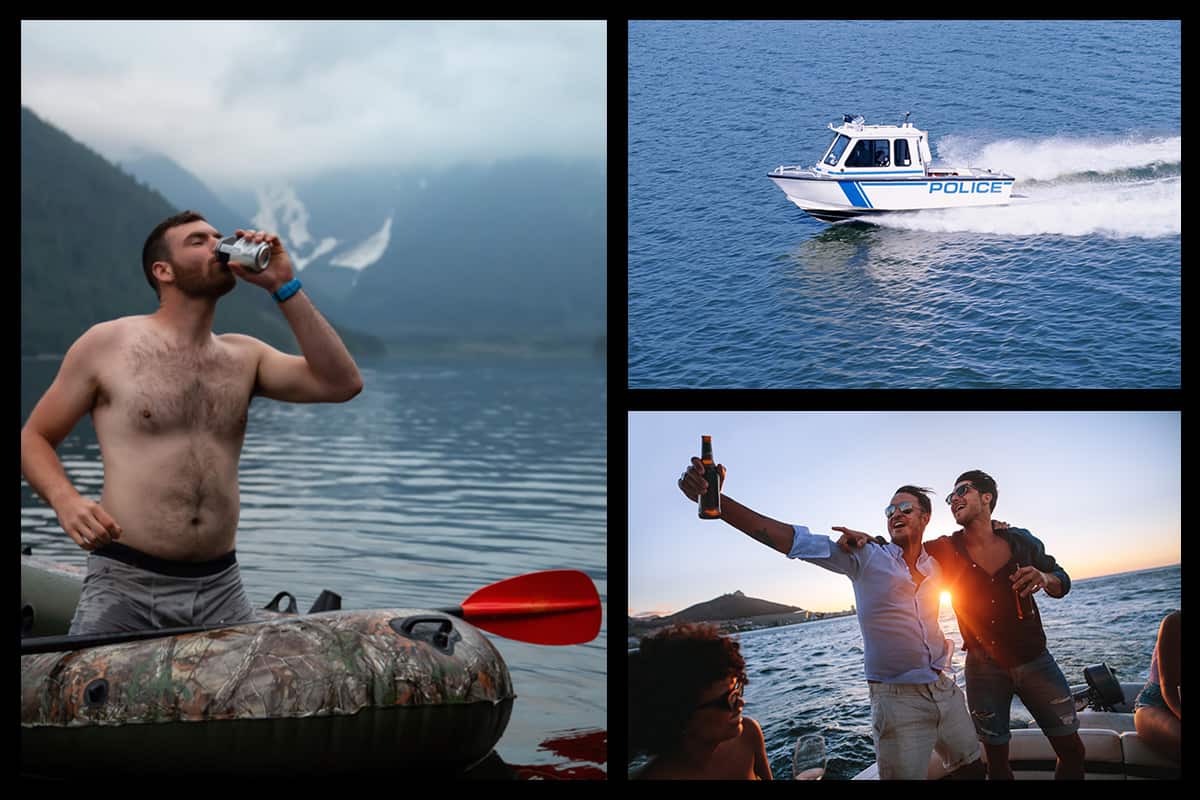 Can you get a DUI on a kayak? Yes, you can get a “DUI” on your kayak. In most states it’s illegal to operate a kayak with a BAL of 0.08% or more. (Colorado and Wyoming it’s 0.10%). A DUI in kayaking is called a BUI-Boating Under the Influence. And Canada, Australia, New Zealand, and the UK have their own versions of a BUI.

I know, I was shocked to learn it, too. But law enforcement sees our “toys” for what they truly are, vessels on the public waterways. And since we’re kayaking the same waters as powered boats, paddlers are now operating under the same laws and therefore you can indeed get a “DUI” on your kayak.

But that’s not the entire story. There are some exceptions and some special rules, depending on which state or country you’re in.

Not a Lawyer Disclaimer: I am not an attorney. More importantly, I am not your attorney. This article is not legal advice. If you desire legal advice, consult a competent, licensed attorney in your area.

What is Boating Under the Influence—BUI?

While most of us tend to think in terms of “Drinking and Driving” as the classic DUI, alcohol is only part of the equation.

BUI can and does in most states mean under the influence of any controlled substance or anything that impairs a kayak operator from effectively piloting their vessel. The specific legal terms vary from state to state, but the intent of the BUI law is the same—anything that impairs your ability to effectively and safely operate your vessel is considered a substance that you are “under the influence” of.

So, whether it’s alcohol, marijuana, amphetamines, or sleepy-time cough medicine, if an officer believes that your ability to pilot your vessel is impaired for any reason, you can be charged with BUI.

I remember a conversation I had with a law enforcement friend where I asked him about an anti-anxiety herbal remedy I was taking—Valerian Root. My eyes about bugged out of my head when he said, if that stuff makes you euphoric and happy and alters your ability to drive, you’re under the influence.

What’s the Difference Between a BUI and a BWI?

Technically there’s no difference between a BUI and a BWI.

Different states use different wording to state the same thing—operating a vessel under the influence/intoxicated is illegal.

What do the Police Consider a “Vessel?”

This is where the interpretation of the BUI laws gets very tricky. You see it’s up to individual officers to interpret and apply state boating laws. And since kayaking has exploded in popularity in a short period of time, the state boating laws haven’t kept pace with their application.

This means that officers in the field have to make judgement calls on many things when encountering a kayaker who may be under the influence.

The simplest way I can put this is, that if your kayak or canoe has a trolling motor on it for fishing or whatever, it’s a “vessel” and an officer is going to treat you the same as if you’re driving a 200HP ocean fishing boat.

And if you’re inebriated on your trolling kayak, it’s a BUI.

Where things are up for interpretation is when you’re in a “manual-powered”, “non-motorized”, “powered by paddle or oar” vessel. Many states specifically exempt kayaks with that kind of verbiage, and many states include “anyone operating any vessel”.

It’s then that law enforcement officers, depending on their interpretation of their state’s statutes, will issue you a BUI … or choose not to. And even if the law isn’t clear, or the wording is confusing, or you just “didn’t know”, you’re still going to be going to court to figure all that out.

So, you need to be fully aware of your individual state’s specific rules around “non-motorized” vessels or any other of the dozens of wordings that different states use to include or exclude kayaks from BUI laws.

What’s the Fine for a DUI on a Kayak?

The penalties for BUI range in severity from state to state and whether it’s a first, second or repeat offense.

In addition to fines and jail time, you can have your boating license for that state suspended for a few years all the way up to life. Beyond that, you may be required to complete an alcohol education program or serve community service hours once out of jail.

How to Avoid a DUI on a Kayak

So, by now you’ve got to be asking yourself how to avoid all this BUI unpleasantness. By the time I got done researching this article, that’s all I wanted to know. Because jail? Uh, no thank you. (Not to mention I like to safely kayak.)

Well, the simplest way to avoid a BUI while on your kayak is to NOT DRINK! Before, during, or after.

Obvious though that may be, some of us like our refreshments, and it’s not always easy to be Larry Legality in a group of kayak campers.

So, if you do happen to have a drink while on the shore of a kayak camping trip, make sure you put plenty of time in between it and when you plan to get out and paddle your kayak. But like I said, and with the current climate in boating law enforcement, it’s best to leave the drinking until after you’re done kayaking for the day.

If You do Get Stopped for BUI…

Listen, I’m under no delusions, and neither is law enforcement—people will drink and kayak. It’s going to happen. And in my experience talking to law enforcement friends and dealing with law enforcement officers in everyday life, being clam courteous, and cooperative goes a long way in officer discretion, especially if you’re on a non-motorized kayak.

A few years ago on Lake Havasu Arizona, my wife, kids, and I were pulled over and boarded by the Sheriff’s patrol boat. The encounter went well—nice and friendly—and the only thing they found was that we didn’t have our Class IV throwable “readily available”. It was under a seat. And the quote was, “If we’d found any alcohol on board, even if you hadn’t had any, we’d have cited you for the Class IV throwable.”

As it was, we were back to tubing in our boat.

(Once again, NOT legal advice, just personal OPINION. Consult a lawyer if this is a big issue for you)

Why the Crackdown on Kayaks?

At a time when law enforcement and education about boating and drinking were just beginning to make an impact on reducing boating accidents and deaths due to alcohol, the paddlesports and in particular kayaking, exploded in popularity.

Because of this, though boating accidents due to BUI are slowly decreasing, kayaking deaths in particular are on the rise.

If you add to the fact that kayaks are smaller, less maneuverable, and less able to get out of the way of trouble in a hurry, then it’s no wonder why law enforcement has gotten deadly serious about policing kayakers right along with other motorized boaters.

Since 65% of the boating injuries in Canada are due to drinking alcohol, the Criminal Code of Canada states that it’s illegal to operate a boat if you’re impaired by drugs or alcohol. And you’re considered “under the influence” if you have a Blood Alcohol Concentration (BAC) at or over 80mg or 0.08%.

If you’re convicted of BUI of alcohol or drugs in Canada, the minimum penalties are:

It’s Not Just the Vessel Operator…

Passengers on a boat in Canada may drink alcohol on a boat ONLY IF it:

The boating rules for legal alcohol consumption are different from province to province.

While Australia doesn’t call them “BUI” laws, they do have strict boating under the influence laws with even lower BAL limit requirements.

“For skippers of recreational boats, the (BAL) limit is under 0.05 even when your boat is at anchor, unless the boat is securely moored in a marina, to a jetty or wharf or on a swing mooring.”

But in general kayakers are considered vessels and they have to follow the same laws and rules as power boaters.

A kayak is considered a vessel the same as other boats and you can be prosecuted for being under the influence:

“You can be prosecuted for operating a boat in a manner that causes unnecessary danger, under section 65 of the Maritime Transport Act.”

In a remarkable departure from the rest of the Western boating world, the UK allows drinking on a kayak—it’s not illegal.

Due to some concessions given to recreational boaters, vessel under 23 feet and moving slower than 7 knots are exempted from boating under the influence laws.

“Boaters may be prosecuted under the Merchant Shipping Act 1995 if their actions on the water are seen to be endangering other vessels, structures or individuals and they are under the influence of alcohol.”

USCG – 6 Most Common Rumors About Alcohol and Boating

link to Can I Go Kayaking While Pregnant? A Guide for Expectant Moms

Learn More
link to How Many Calories Does Kayaking Burn?