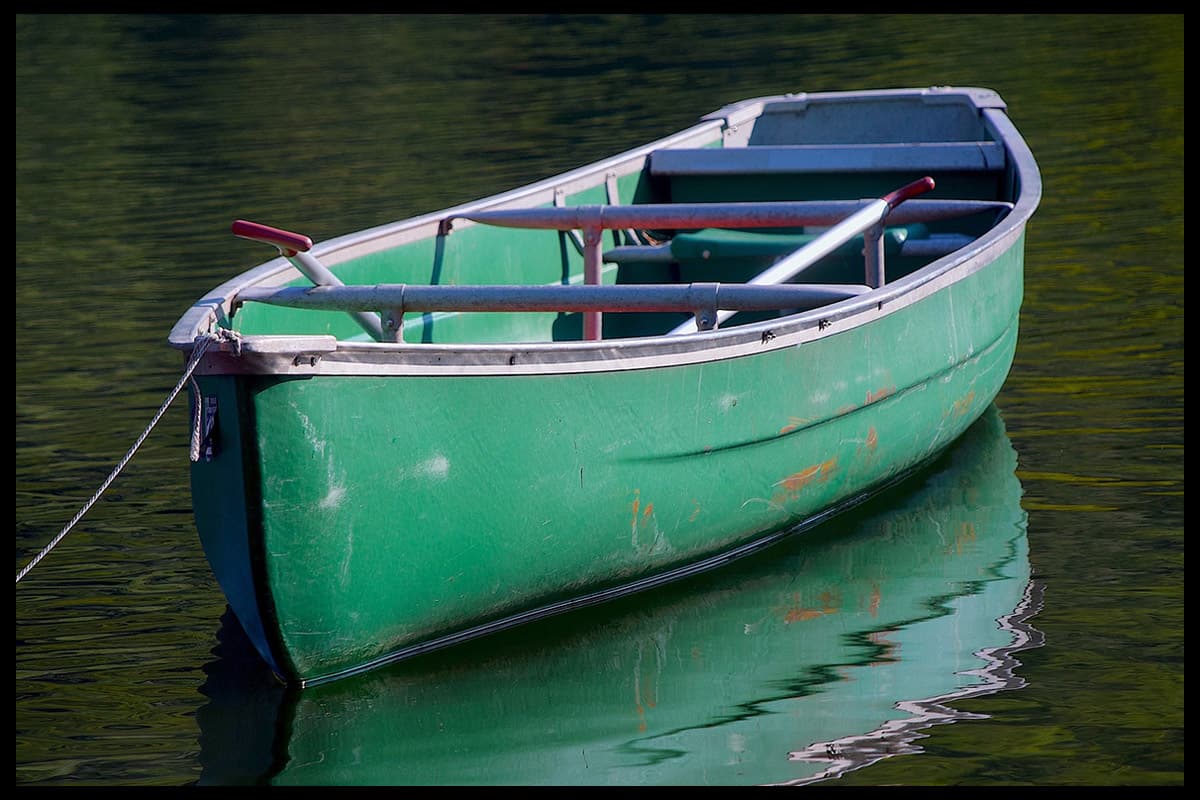 If you’ve never heard the term “Scanoe”, you’re probably not alone. The last Coleman branded Scanoe was made in 2001. Ever since, there have been imitators called Scout canoes, but the good old Coleman Scanoe? Maybe you can find one used, but new? Not anymore, my friend.

What is a Scanoe? The Coleman Scanoe is/was a cross between a skiff and a canoe – hence “scanoe.” A Scanoe is wider than a regular canoe and has a square back so a trolling motor can be mounted to it. Scanoes are no longer made by Coleman, but plenty of these “scout” canoe types are on the market, taking the place of the branded “Scanoe.”

Now listen, I’m completely prejudiced when talking about canoes made to mount trolling motors. I’ve written about trolling motors for canoes and have fond memories of my youth, trolling for trout in a squareback aluminum canoe. The Scanoe was just a more purposefully engineered version of that concept, so I love it for that reason alone.

Versatile, portable, fast, and convenient transportation to and from and on the water… A Scanoe is just cool.

If you like the dual function of a Scanoe like I do, you should consider getting one. Because a trolling motor is not only great for cruising around with a few people but more importantly, trolling for fish. The option to take off the motor makes this vessel great for paddling as well!

Read on to see how/where you can get a Scanoe and which one to get!

A Brief History of the Scanoe

Finding a Scanoe in good condition is getting increasingly more difficult, as they’re no longer made. Production started with Coleman in the 1980’s and then the brand was sold to Pelican International around 2001. Pelican also tried their hand at Scanoes once they bought the concept but stopped a few years later.

Though Scanoes are hard to find, Craigslist will occasionally have one in pretty decent shape. Old Coleman Scanoes and other companies’ versions of this canoe can still be found if you keep an eye out.

As you can see in the comparison below, the ’85 and ’89 models are pretty similar. They’re both about 15 feet long and have pretty wide beams for a canoe.

The most noticeable difference between these two models is that the ’85 only has 1.75 horsepower capacity rating, and the ’89 increased its capacity a few years later to 5 horsepower. The slightly wider beam on the ’89 means it’s more stable and thus can hold more weight. And that allows it to handle a few more hp mounted to the stern.

The last Coleman brand Scanoe was made in 2001. Since then, other boat makers have tried their hand at this hybrid vessel, but none have fully resurrected it to mass market appeal.

When Pelican bought the Scanoe brand from Coleman, they took the Scanoe concept and sort of blew it up. The Pelican Scanoe beam/width is a whopping 43″, which makes it sturdy. Sadly, the “plastic” manufacturing materials made it incredibly bulky and heavy.

Pelican’s Scanoe is a whole 5″ wider than the original Coleman Scanoe from 1985! It also has the horsepower of the 1989 Coleman Scanoe, but as I mentioned, that makes it heavier and bulkier. You may feel more drag with the Pelican model Scanoe as well.

On the plus side, this Scanoe is great if you need something heavy-duty and have lots of gear to haul!

Old Town is probably the most reputable brand that still has scout canoes on the market. With Coleman and Pelican, you will need to peruse eBay or Craigslist to find one that’s in good condition.

With Old Town, you can pretty much guarantee the quality, but a hefty price tag does accompany it. Old Town doesn’t advertise itself as a scout canoe—calling it a “Sport”—but the squareback is how you can identify its similar functionality.

Compared to the other two Scanoes, the Discovery has an average length and beam, but with its three-layer polyethylene hull and ability to seat four people, it’s an improvement for sure.

Dicks Sporting goods used to carry a sqaureback canoe that’s similar to a Scanoe, but lately I’ve been unable to find it.

The Sun Dolphin Scout 14′ 3 is a squareback “Scanoe” type canoe that’s capable of mounting a trolling motor to it’s stern.

The most similar in terms of size that I can find at Dicks would be the Old Town Canoe Guide 160. It boasts 16′ in length and an almost 40″ beam, so it’s incredibly sturdy like other scouting boats.

How to Shop for a Scanoe vs Canoe

If you’re looking to get some form of Scanoe or otherwise square stern canoe capable of mounting a trolling motor, it’s important to know the terminology.

“Scanoe” is a slightly outdated term, as production has ceased. If you ask someone at a store about a Scanoe and they don’t know what that is, don’t worry! Just ask for a canoe with a squareback, as one of the most noticeable differences.

Scanoe and squareback aren’t necessarily the same thing, though.

Proceed with caution, as a Scanoe is always a squareback, but a squareback isn’t always an “official” Scanoe. If you want the “Scanoe” for the name, buy an old Coleman or Pelican. If you simply want a squareback canoe you can mount a trolling motor on, you can get one online from several retailers.

The primary difference in a squareback canoe is the most obvious: its square stern design, rather than the classic pointed back end. The front does remain the same. They typically seat three people, so it’s good for family fishing trips or rides around the lake (if the motor’s attached).

The pros and cons are listed together here:

The regular canoe is that “classic” boat with a double-ended point on the front and back. You can’t put an engine on it as easily as with the square back, but it can be done. It’s probably not ideal, though, so probably save this for times you want to paddle or take a leisurely fishing trip with one or two people.

Is a Scanoe for You?

At the end of the day, it depends on what you’ll use your canoe or Scanoe for most. If your focus is to get out on an all-day fishing trip, you a Scanoe or a squareback scout canoe is for you.

In short, the square back or “Scanoe” may be best suited for leisure trolling for fish, especially with motor mounted and ample seating. The regular canoe is good for quick trips, lots of motion, competitions, and just one or two people aboard.

link to Best Trolling Motor Batteries for Kayaks and Canoes

The best trolling motor batteries are deep cycle marine batteries designed for constant and continual charging and discharging. They match the voltage of the electric trolling motor they're powering....