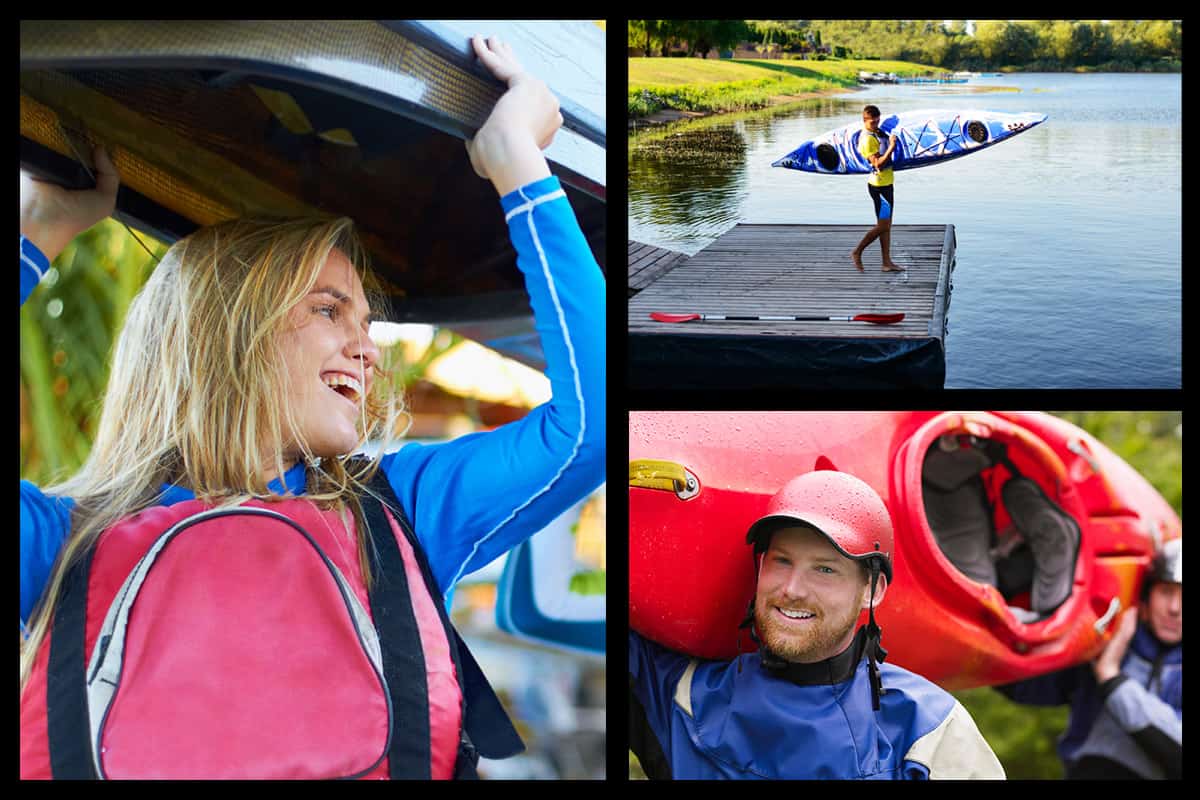 When my daughter turned 13 she asked me, “How much do kayaks weigh?” Because I’d told her she’d have to carry and launch it all by herself. So we did a ton of research to find out just how heavy kayaks are.

Obviously the weight of your kayak will depend on what you plan to use it for as well as several other things. So, study your options, because weight’s a big factor in the everyday use of your kayak. At the end of a tough day paddling, you might not want to lug 50 pounds around by yourself. Or worse, end up dragging your nice new kayak on the ground because it’s too heavy.

I’ve included the weights of popular picks in each of the most common kayak types to get you started.

It helps to understand the effect that kayak constructions materials have on kayak weight. Lighter isn’t always necessarily better. What your kayak’s made of will affect not only it’s weight but it’s durability as well.

There are four basic ways to build a modern kayak. Here’s how they affect kayak weight:

If you’re just starting out, stick with thermoform and rotomolded kayaks for weight, durability, and price.

How to Find a Kayak’s Weight

You can usually find the weight of any kayak by going to the manufacturer’s website and navigating to the page for a particular kayak model. If the weight numbers aren’t right on the front page of details for an individual kayak, look for a section that says something like “More Details” or “Specs” or “Technical Specifications”. The weight number should be pretty easy to find there.

In researching this article I shopped at several brick and mortar stores to see if I could find kayak weights printed on the boats. Oftentimes they didn’t list the weight on the kayak’s price tag. I ended up pulling out my mobile phone and searching for the kayak weight numbers online.

A better way would be to ask a sales associate if you can see the manual that came with the kayak. I was pleasantly surprised to find out that they most stores had the manuals for individual kayaks in their warehouse.

Your first kayak is most likely going to be a single kayak and you’ll probably want to ask yourself a couple of questions. Obviously the first is, “How much does it cost?” But it’s more important to figure out how much a kayak weighs.

Because you’ll probably spend as much time carrying your kayak to and from the water, lifting it up over your head, and hoisting it on and off the roof of your car as you will paddling it.

Here are few examples of how much a single kayak weighs:

If you’ve got a significant other, best buddy, or just someone you’d like to kayak with, the two of you can share the duty and weight of carrying a tandem (two-person) kayak to and from the water. Because tandem kayaks will be a bit heavier than solo kayaks, but when you split that weight between two people, I’ve actually found it to be an easier haul.

Examples of how much a tandem kayak weighs:

At a certain weight, around 60 pounds in a solo fishing kayak, you’ll have to start looking into a kayak cart to transport heavier fishing kayaks to and from the water. Because even if you could lift all that weight over your head, you’re going to have loose fishing gear and tackle that will add weight and clutter to your kayak.

Here are a few examples of how much fishing kayaks weigh:

As you’d expect, the lighter the inflatable kayak is the more prone it is to failure—materials ripping, coming unglued, or stitching coming loose. Don’t get me wrong, there are some excellent inflatable kayaks on the market. It’s just that, from my research regarding quality inflatable kayaks, you aren’t going to save that much weight with an inflatable kayak.

What you’re really saving with an inflatable kayak is space. Because in order to make a durable, reliable, and compact-portable kayak, manufacturers have to use materials with some substance to them. And that makes them heavier than you’d think.

Examples of how much inflatable kayaks weigh:

How much does a Pelican kayak weigh? Most Pelican kayaks weigh close to 40 pounds, a great weight for beginners. Pelican Kayaks can weigh anywhere from 19 pounds to 78 pounds depending on size, weight limits, and function.

After looking up the weight specs on each and every one of the kayaks on Pelican’s website, I can tell you that Pelican hits just about every number between their lightest weight (19 pounds) and the heaviest kayak they produce (78 pounds).

As one of the most popular and affordable kayak brands, many Pelican kayaks weigh right in the sweet spot for recreational solo, sit-inside, sit on top, tandem, and entry-level fishing kayaks. That sweet spot, and yes this is totally subjective, is around 40 pounds.

I included just about every kayak that Pelican manufactures in this list, just to give you an idea of the wide array of weight choices you have if you decide Pelican is your brand of kayak.

Examples of how much Pelican kayaks weigh:

How much does a Hobie kayak weigh? Hobie kayaks weigh more than the average recreational kayak. All of them are over 60 pounds and at the high end, fully rigged with fishing accessories and gear, they can weigh as much as 240 pounds.

Hobie kayaks are in a class by themselves. Hobie manufactures and sells just about every type of kayak there is in every weight you could imagine. Island outrigger catamaran, recreational paddle, pro fishing, and inflatable and hard-shell pedal kayaks all run the spectrum from light to heavy to heaviest.

Here are some examples of how much Hobie kayaks weigh:

How Heavy is a Kayak in KG?

Kayak websites sometimes forget to include a kayak’s weight in kilograms (kg). (I’ve been guilty) The simple formula if you run across that problem is:

Kayak Weight Matters, But Not as Much as You Think

All this talk about kayak weight misses a little bit of the point though. Because yes, weight is important. But how heavy a kayak is isn’t the only thing to consider when you’re looking for a kayak that’s the right size for you.

Of course you’ve got to be able to carry your kayak to and from whatever water you want to paddle, but once on the water, weight plays an important role in:

So, by all means choose a kayak with a weight that’s light enough for you to carry and launch, but keep in mind what you’ll be using it for. A couple extra pounds of kayak weight might just get you a much more versatile boat.