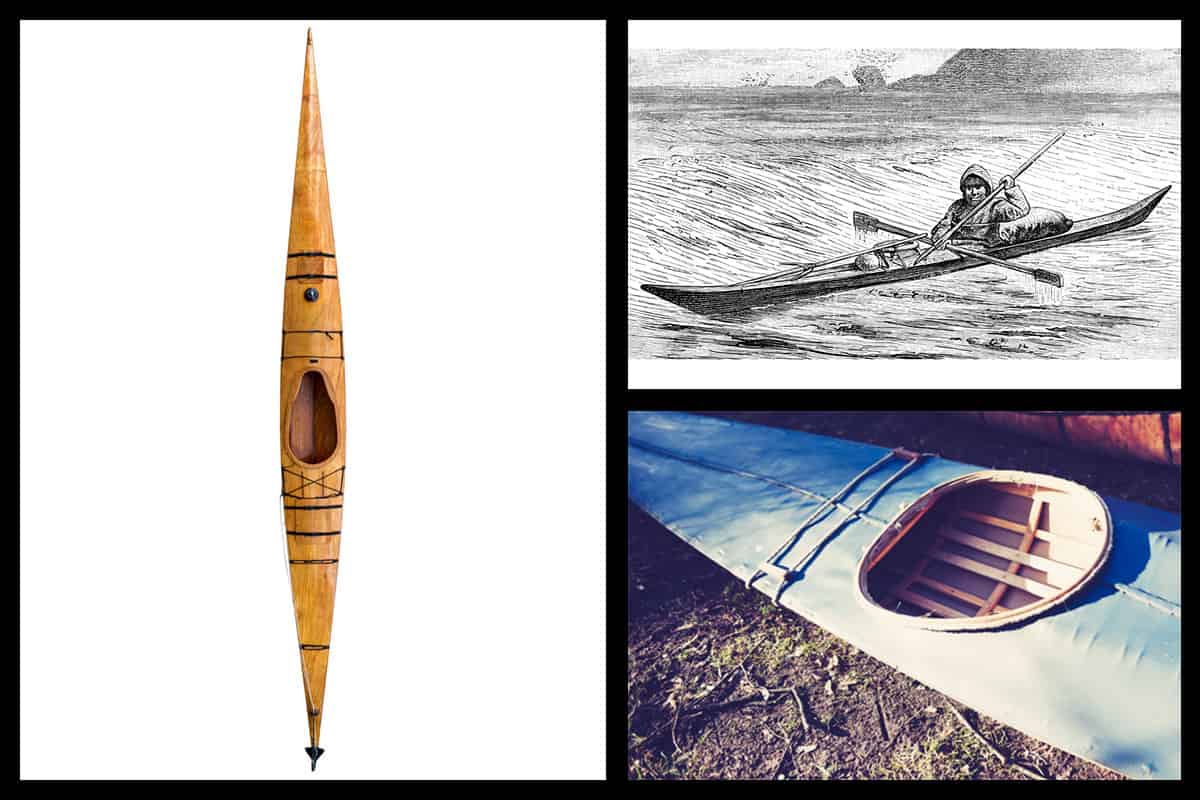 Okay, this article is for all the inquisitive kayaking newbies out there, wondering, “What is kayaking, anyway?”. Or maybe you’re just interested in some kayak nostalgia. A bit of boring kayaking history hoopla before breakfast. A dash of morning kayak meaning demystification. And all that accented with a quick trip down kayaking history museum memory lane.

And why wouldn’t you. Kayaking has become a favorite water sport for tens of thousands of people around the world. It’s fun, healthy, and an enjoyable outdoor pastime. So let’s take a closer look to what kayaking is, its history, and some interesting facts about the origins of kayaks.

What Is Kayaking? Kayaking is a water sport involving a low sitting boat propelled by a human paddler with a double-ended, handheld paddle. Kayaking was originally invented for hunting, but now kayaks are mainly used for recreation and competitive sporting events worldwide.

Affiliate Notification: Paddle Camp is reader-supported. Some of the links below are affiliate links, which means we will earn a commission on the products or services you purchase using the links.

Table of Contents hide
1. What Is A Kayak?
2. What Does “Kayak” Mean?
3. History of Kayaking
4. Kayaking and the Olympics
5. When Were Kayaks Invented?
6. Traditional Kayaks
7. When Did Kayaks Become Popular?
8. Traditional Kayak Museum In Portland, Oregon
9. Modern Kayaks
10. Kayaking History Wrap-up

What Is A Kayak?

A kayak is a lightweight boat that sits low in the water. There are many different types of kayaks and they can be made from many different materials. Some kayaks are even hand crafted, but most commonly they are commercially made of rotomolded polyethylene, making them very durable.  A modern kayak has a front deck covering the paddler’s legs and a back deck covering the stern of the boat.

A kayak, vs a canoe which has a raised seat and uses a single-sided oar, has a seat placed on the bottom of the kayak’s hull. Kayaks also are powered by the use of a doubled-sided oar.

A conventional sit-inside kayak has a watertight covering at the top that is just wide enough for a paddler to sit in. Though kayaks typically come as a single person boat, there are two and even three-person kayaks available.

What Does “Kayak” Mean?

The word kayak means “hunter’s boat” or “man’s boat” in Inuit (or Eskimos as these native peoples were first called) Which makes sense as these vessels were originally designed for hunting seals and whale.

Each kayak was unique to an individual paddler and was built around his body size, hence the reason it was called a “man’s boat”.

The “hunter’s boat label was not only for its intended purpose in the water, but also for its stealthy ability in hunting. This made it easy to sneak up on wild game like seals, whale, and caribou.

Although the kayak’s original purpose was for hunting in the arctic waters of the North, by the early 1800s this unique boat made its way to parts of Europe. Soon men, from Germany and France in particular, were starting to use this boat for recreational sport. With its lightweight frame, low seated position in the water, and easy maneuverability, the kayak was an easy cross over from a hunting and survival boat to a sporting boat.

The popularity of the kayak didn’t take off until 1845 when British sportsman, John MacGregor, used his commissioned canoe, called a Rob Roy, to explore rivers and lakes in Europe. He wrote and illustrated his adventures in a book titled “A Thousand Miles In The Rob Roy Canoe”.

Years later in 1873, and with his now famous canoe club, MacGregor introduced kayaking as a competitive sport by organizing and introducing it through a regatta.

However, the modern-day version of white-water kayaking originated in 1931 when a man named Aldof Anderle kayaked down the Salzachofen Gorge in the Austrian Alps.

Kayaking and the Olympics

Kayaking made its Olympic debut in 1924 Paris Olympiads. However, this was the only a demonstration event. Eight years later, at the Berlin Olympics in 1936, kayaking became an officially medaled sport.

Women’s teams were added later in 1948. More recently, competitions have stopped using the 500 and 1,000 metered events and have favored the 200 and 500 meter trials. Even though American men’s and women’s teams have received Olympic medals in kayaking, the sport remains dominated by the Europeans.

When Were Kayaks Invented?

Although most historians can agree that kayaks have been around for at least four to five thousand years and were invented by the Inuit peoples of modern-day Greenland and North America, the exact period of their origin is still unknown. The oldest known kayak, dating back to 1577, is in the Museum Fünf Kontinente in Munich, Germany.

The structure of a traditional kayak was made of whale bone or driftwood washed ashore, as the local landscape often did not provide very many trees for construction. Seal skin, or other animal skins, were then stretched across the frame completing the boat itself. Then, whale fat was spread across the skins to offer water resistance.

One of the main problems with early designs was a kayak’s stability. Early kayaks weren’t that stable, so kayak builders increased their buoyancy and thus stability by inflating seal bladders and attaching them inside the kayak for increased buoyancy.

Since mass production was not an option at the time, these boats were made and designed by the hunters or paddlers themselves. Their kayak was built to that paddlers exact measurements with the length being typically three times the span of his outstretched arms. The cockpit’s width was the width of the builder’s hips plus two fists (and sometimes less). The typical depth was his fist plus the outstretched thumb (such as that of a hitch-hiker).”

Unlike modern kayaks, which are made for sport, these kayaks were made for utility, hunting, travel, and sometimes the relocation of an entire family. Because the waters of the artic north are below freezing most of the time, they needed to be waterproof, buoyant, and designed to prevent capsizing.

As the Arctic North waters were too cold for recreational swimming, most Inuits didn’t know how to swim. So preventing a kayak from capsizing was essential!

When Did Kayaks Become Popular?

Legend has it that the rise of the kayak became popular in the 1920’s with the silent film “Nanook of the North.” This film, which many consider being the first documentary, follows Nanook and his Inuit family.

For most of America, this was the first time they’d seen a kayak and the people behind the design. The film became so popular that soon words like “kayak” and “igloo” became part of everyday American vocabulary. Stores hopped on the growing trend and started selling Inuit (or ‘Eskimo’ as it was called back then) related items.

Around that time, a growing backlash was mounting against the canoe due to several tragedies, and people started to wonder if the kayak could be a suitable alternative. The kayak didn’t immediately take off, but this was the beginning of its becoming a popular American sport.

Now, kayaks are a common sight drifting down slow rivers, paddling ocean bays, or used in intense competitions in the rushing rapids of a raging river.

Since kayaking is not limited to just hunting anymore, there are many different types of kayaks available:

The basic design of the kayak remains the same, although each kayak has been adapted and modified according to what its use will be. Some will be longer and flatter for slow drifts down a river. Some will be shorter with rounder edges for racing in rapids, but all maintain their seated positions, most have watertight seal at the top, and all utilize propulsion from a doubl-sided oar.

The Lincoln Street Kayak and Canoe Museum in Portland, Oregon, offers its visitors an educational and visual step back in time where they can view handmade replicas of different and unique kayaks and canoes from across the centuries.

Harvey Golden, the proprietor of the museum, hand crafted these full-sized replica pieces making this museum the “largest and most complete assembly of pan-arctic kayak forms in the world”

These kayak replicas are on display at the museum to showcase not only kayaking history, but individual kayak style, design and functionality. Mr. Golden’s kayak-making process can be viewed on his website. There, you’ll find dozens of examples of canoes and kayaks both under construction and being used on the water.

Modern kayaks are mass manufactured, durable, economical to own and enjoy, and are even more versatile than they were hundreds of years ago.

Getting into kayaking is easier than ever. Contemporary kayaks can be bought in all shapes, sizes, and colors. Different kayak designs have different uses and no matter the water you want to paddle there’s a kayak that’s designed to match it.

Kayaking has fascinated the American people and the world since it’s first introduction in the 1920s. Since then, paddlers have adapted this versatile boat for uses ranging from hunting and fishing to leisure and competition.

If you’re looking for the most complete and thorough collection in the world on traditional and ancient kayaks, the Lincoln Street Kayak and Canoe Museum in Portland, OR is the only place to go. The museum is dedicated to the art and craftsmanship of these impressive vessels. They offer a wealth of knowledge on the history and design of the kayak.

link to Types of Canoes

There are many different types of canoes to choose from, each having its own benefits for a particular use. If you're just starting out, a recreational plastic canoe is probably the best canoe for...

The best canoe for fishing is a multipurpose rotomolded or polyethylene recreational canoe. They're inexpensive, durable and stable. And they'll allow you to fish on different types of waterways.