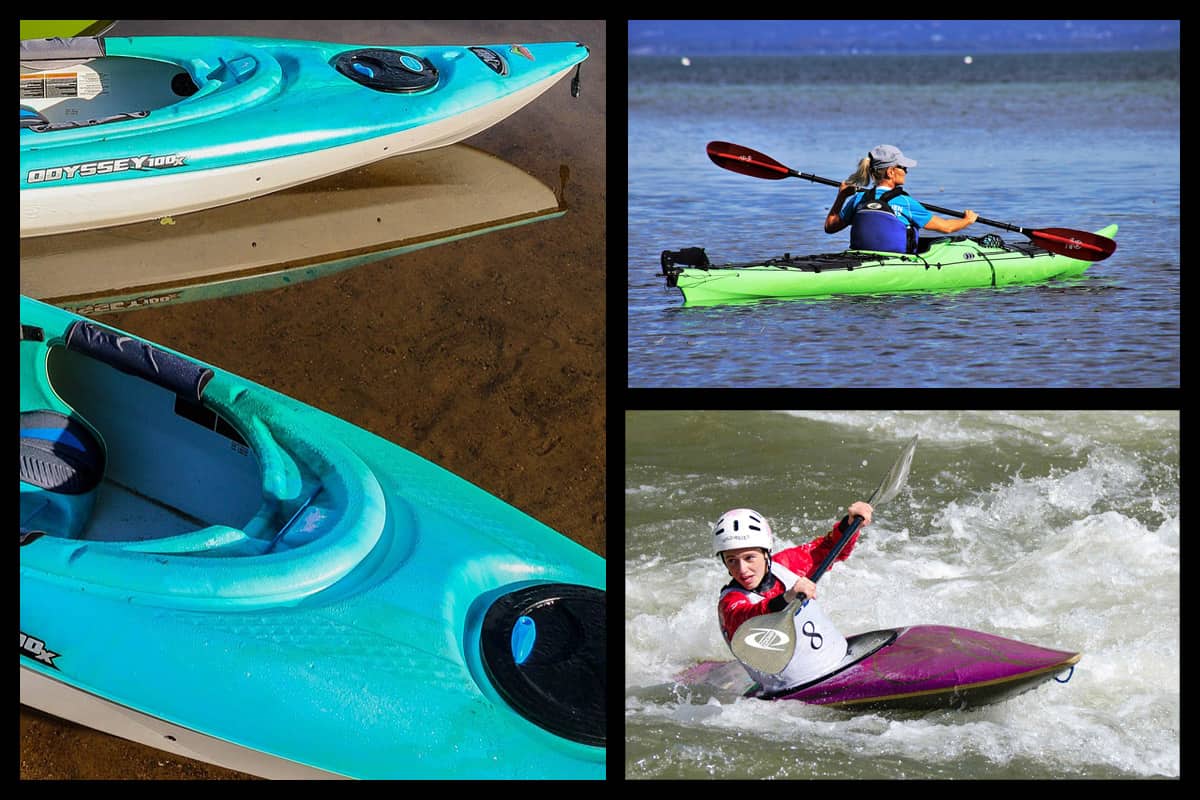 Before I bought my first kayak, I was confused by how many different types of kayaks there were. I had no idea what each one was for. So I did a lot of research and finally figured out the exact type of kayak that would fit my family’s needs perfectly. (We actually ended up buying 2)

Here’s what you need to know before deciding on what type of kayak to buy.

What are the different types of kayaks? There are 5 types of flat water (recreational) kayaks: Sit-inside, Sit-on-top, Touring, Inflatable, and Pedaling kayaks. And there are 4 main types of whitewater kayaks: Play Boats, Creek Boats, River Runners, and Inflatables/Duckies.

I that weren’t enough, there are so many different kayak brands out there and each one has many different types of kayaks, that it can all get really confusing. So I did a ton more research and boiled down the important stuff for you.

Flat water kayaks are made for people who love:

There are 2 types of sit-inside kayaks—recreational and touring.

Flat water recreational sit-inside type kayaks are are designed to be stable and maneuverable. Generally, they’re between 8′ to 12′ long, roughly 28″ wide and have weight limits averaging around 300 lbs.

Recreational sit-insides have closed cockpits, but the cockpit openings are usually large enough that they’re easy to get in and out of.

Pros: These type kayaks are a good hybrid compromise between the stability and convenience of a sit-on-top, and the maneuverability of a touring kayak. Sit-insides are wide enough to stay very stable. The oversize cockpit allows you to stay cool in the summer and install a skirt to stay warm and dry in the winter.

An added bonus is that because of their shorter length, they’re easier to store when you’re not using them.

Cons: Unfortunately all that stability and maneuverability come at the cost of their difficulty in tracking straight. In addition, if you capsize you’ll have to pump the water out in order to get back in and paddle to shore.

Touring kayaks are generally between 12′ to 15′ long, but they’re narrower than recreational sit-ins and are usually between 23″ and 26″ wide. They have a range of weight limits that average around 300 lbs.

There’s debate at the differences between touring type kayaks and sea kayaks. But in general touring kayaks are shorter, have less features, and aren’t quite as streamlined as sea kayaks. There are different hull designs on both of them, sea kayaks are generally more expensive and made to store enough gear to take multiple day trips.

Pros: Flat water touring kayaks are designed to have pretty good primary and secondary stability. Touring kayaks are faster because of their length and superior tracking ability which makes them ideal for day trips. They’re made to take less effort to paddle longer distances over relatively flat water. Hence the name, “touring.”

Cons: However, the cockpit openings on touring kayaks are narrower and shorter. As a result they require some additional skills and safety precautions to operate. Touring kayaks have thigh braces inside the cockpit that assist a paddler in using their thighs to roll back upright from a capsize or rollover.

Another downside to touring kayaks is that they’re a bit heavier to carry and because they’re much longer than recreational kayaks they’re hard to transport and store.

Sit-on-top recreational type kayaks are exactly that—you sit on top of them out in the open. Sit-on-top kayaks are made for summer, having fun, and learning how to kayak. If you’ve ever rented a kayak, chances are high it was a a sit-on-top. Kayak rental facilities usually have stacks and stacks of them.

Pros: Sit-on-top kayaks are virtually unsinkable, easy to flip back over if you capsize, and just about anyone of any size can fit on them and learn to paddle. They’re easy to get in and out of, have great primary stability, and if you flip them, they won’t fill up with water.

Cons: One downside to sit-on-top kayaks—you’re going to get at least a little bit wet paddling them. Oh, and the one-piece unsinkable design makes them relatively heavier than sit-insides.

Ocean/Sea kayaks are a step up in features and function from touring kayaks. Sea kayaks are a bit longer, in the 15′ to 19′ range. They generally have an even smaller cockpit, sometimes less than 20″ wide. Sea kayaks are long and sleek and made to handle waves and small surf.

Pros: Ocean kayaks track better and handle waves and wind better. They have design features built into their hulls that make them capable of handling ocean chop and waves with ease. They won’t fill up with water when swamped due to having sealed bulkheads in the bow and stern

Not only are ocean kayaks better at handling adverse water conditions, but they have higher internal volume (space) so they can hold more gear, enough for multiple day trips.

Cons: The ability to handle chop and track straight comes at the cost of reduced flat water performance and stability. They’re also a lot heavier than other kayaks. Oh, and you’ll need a second garage to store them.

Today’s inflatable kayaks are made of tough, durable PVC and rubberized nylons that can handle everything from sandy to rocky beaches.

And inflatable kayaks are used for anything from river rafting to lake touring and everything in between.

Pros: Inflatables are definitely recreational, but aren’t all kayaks “recreational” to one degree or another? They have wider beams which makes them more stable on flat and flowing water. They can handle heavier loads and they’re easy to paddle and maneuver.

Cons: Remember that hole we mentioned? Any hole in an inflatable, no matter where you are, makes your day kayaking come to an end. (Remember your patch kit and know how to use it.)

Pedaling kayaks have come a long way since the days you remember renting those 2-seater pedal boats at the local pond. Today’s pedal-powered kayaks are high-tech, high-speed boats that let you propel yourself using your legs instead of your arms and shoulders.

Pedaling kayaks can be used for most things that recreational kayaks can. But fishermen especially love pedaling kayaks as they allow their hands to remain free to cast and fish instead of having to paddle.

There are two types of pedaling kayaks:

Whitewater kayaks are meant to run rapids, do tricks and generally leave the rest of us in awe as we gaze wide-mouthed at the wild people who paddle them.

As we mentioned above, there are 4 types of whitewater kayaks:

We’ll throw in tandem type kayaks as a major difference in kayaks, because they’re in a class all by themselves.

Tandem—2-person—kayaks come in just about every type of kayak above, except whitewater kayaks. Recreation, sit-in, sit-on, touring, ocean, and even fishing kayaks come in tandem versions.

Tandem kayaks are longer, wider, have more weight carrying capacity, and if you’ve got a good paddle partner they’re that much easier to paddle.

Well, that’s the rundown on the major different types of kayaks you can get. The thing you need to do now is decide on what type of kayaking/water you want to paddle and find the type of kayak that’s best designed and suited to that.

Each of these types of kayaks are well-suited to their individual uses. That is to say that it’s hard to make them perform outside of the type of water/environment that they were designed for. For instance, you wouldn’t use a recreational sit-on-top kayak to go out in the ocean waves.

So, don’t be surprised if you find yourself saying that you might just need two different types of kayaks.