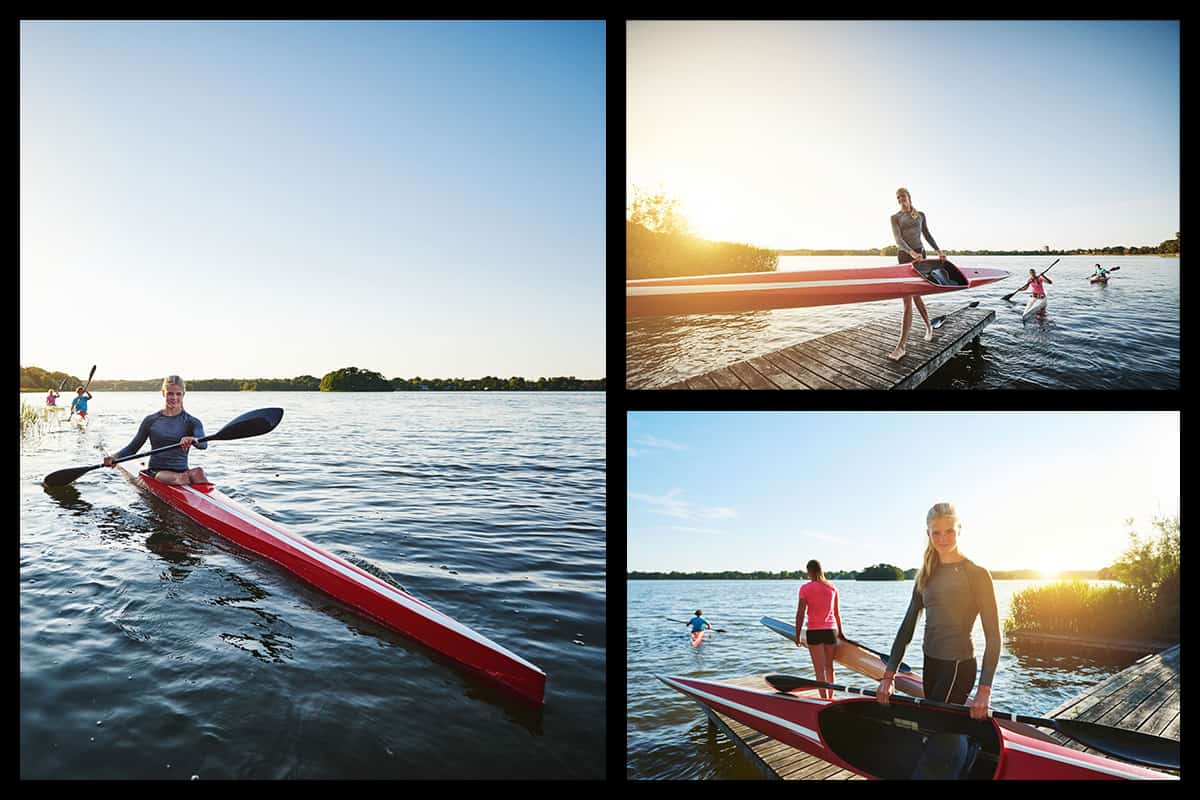 By the time you’re done reading this article, you’ll know everything worth knowing about kayak length and why you should care. Including what effect kayak length has on kayak stability, the length of the most common types of kayaks, and why it’s important.

And just to keep a kayak length learning session interesting, we’re throwing in an awesome video of 100 people paddling the World’s Longest Kayak.

How Long is a Kayak?

Kayak lengths range from the small to the super long. For instance, average ocean touring kayak lengths can exceed 16 feet long. And whitewater kayak lengths average from 8 feet down to 6 foot long play boats. But like I said—you’re more likely to run into a 10 foot kayak than anything else.

Use this kayak length chart as a guide to help you visualize the different types of kayaks and their average lengths.

Here’s the list of those types of kayaks and their lengths:

How Long is a Standard Kayak?

A typical standard (recreational) kayak averages about 10 feet long. A 10 foot recreational sit-in or sit-on-top kayak is where most people are going to start their kayaking journey.

That 10 foot kayak is long enough to paddle smoothly, it’ll track pretty straight, and it’s short enough to be easily maneuvered. That’s not to say that a 9.5′ or an 11′ kayak won’t be perfect for you, it just that with a 10 foot length kayak, more people:

Here are few examples of how long a “typical” kayak is:

How Long is a Tandem Kayak?

The average tandem kayak measures between 12 and 13 feet long. Two-person recreational kayak lengths vary from 10-14 feet long, but that 12 to 13 foot length for 2-person kayaks seems to be the sweet spot. Despite the fact that tandems have to be longer than solo kayaks in order to fit that extra person, there are still tandem kayaks available in that 10 foot average length.

12 foot long tandem kayaks are long enough to accommodate 2 people comfortably while maintaining a weight that’s easy for them to transport it. Twelve-foot two-person kayaks have good maneuverability and that makes them easy to learn on.

In addition, tandem kayaks transport pretty well (though now you’re at a length where you may need a truck or SUV). And finally, finding space to store a 12 foot kayak isn’t as hard as with a larger kayak.

How Long is a Sea Kayak?

So, how long is a sea kayak? Sea kayaks average 15 feet for a solo ocean touring kayak—some shorter some longer. Entry-level sea kayaks start at roughly 14 feet long and go up to more advanced sea kayaks in the 19 foot range. Tandem sea kayak lengths average about another 1 to 2 feet longer.

Here’s where things get interesting, because ocean/sea kayaking is its own kind of adventure. And if you’re going to go out away from shore where you’re in the waves, weather, and wildlife you’re going to want quality, stability, and most of all seaworthiness. And since length helps you with two of those three, you’ll discover that ocean-going kayaks are a bit longer than other recreational kayaks.

In addition, longer kayaks are faster, track straighter and cut through the water better than their shorter counterparts. This is because a longer kayak can be narrower and still displace the same amount of water. i.e. provide the same buoyancy as a shorter but wider kayak.

Obviously the type of ocean you’ll be paddling will play a big part in how long you want your saltwater kayak. Rougher seas require a bigger boat.

Here are some examples of how long sea kayaks are:

How Long is a Fishing Kayak?

So, how long is a fishing kayak? The average fishing kayak is roughly 13 feet long. I’ve seen them as short as 10 feet and as long as 16 feet and longer, but the vast majority of serious fishing kayaks fall into that 13 foot length range.

Technically, as long as a kayak can be fished from, it’s a “fishing” kayak. But there are specialized features that make a kayak suited specifically to fishing. One of them is a fishing kayak’s length, because how long a kayak is determines, at least in part, how stable it will be and well it can absorb waves while or let you stand up in it to you fish.

Fishing kayaks are platforms to fish from more than they are kayaks to paddle. As such, more length means:

How Long is a Pelican Kayak?

Pelican Kayaks are one of the most popular and searched for kayak brands on the internet. They’re great for beginners and have several kayaks to fit every length you might need. We wrote an an entire section in our Kayak Weight article just on Pelican Kayaks.

So, how long is a Pelican kayak? Pelican Kayaks have so many 10 foot kayaks that it’s hard not to call them the “10 foot long kayak company.” Of course they do have kayak choices at 8, 12, 13 and 14 foot lengths, but by far they have the most kayaks in 10 foot length.

And now, finally, because we promised…

The Longest Kayak in the World!

L.L. Bean, for its 100th year anniversary, assembled and paddled the longest kayak in the world.

Built from over 100, Point 65N modular kayak units, it set the world record at 407.7 feet long! Then, in keeping with its 100th anniversary theme, 100 L.L. Bean employees actually paddled it … and it didn’t sink or capsize. A feat in and of itself.