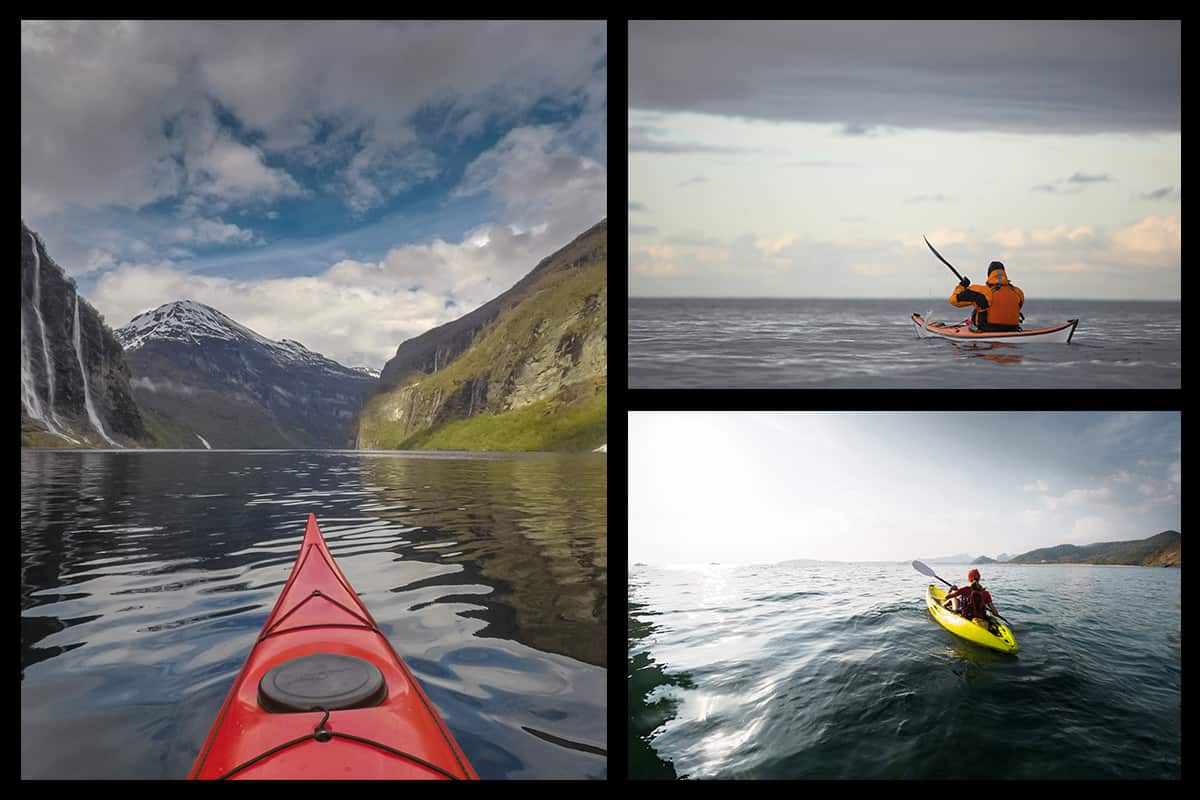 How long does it take to kayak a mile? The first time I asked this question, was right before we planned to kayak Pinecrest Lake in California. Which coincidentally is about 1 mile and a half long.

So, how long does it take to kayak a mile? It takes about 30 minutes to kayak 1 mile on flat calm water. Obviously, how fast you can kayak a mile will depend on several factors: how much paddling experience you have, wind and wave conditions, and what type of kayak you’re paddling.

So how long did it actually take me to paddle a mile down Pinecrest Lake and back? Better yet, how long will it take you to paddle a mile? This article will break down all that factors into how fast you can kayak.

How Fast Does a Kayak Go?

There’s a theoretical maximum speed for kayaks. It’s called the maximum hull speed, and it’s basically the fastest a kayak will go before it starts to plane.

The formula for this limit is 1.34 time the square root of the hull length at the waterline—LWL.

That was too much theory and formula for me, so I’ve tried to simplify it—ask a different question.

How Fast Can You Paddle a Kayak?

That’s the real question, isn’t it? Because “theory” won’t be paddling your kayak.

The answer is that beginning kayakers in a kayak with an average length of 15′, that’s about 24″ wide, in calm waters, and paddling at a moderate pace can paddle at 2 to 2.5 knots. More experienced kayakers can paddle 3 knots. This puts us all in the 20-30 minutes to paddle a mile range.

But that still sounds like a lot of specifics in order for you to be able to paddle a mile in your kayak in 30 minutes. So what are some of the conditions that affect how fast a kayak can go, in practice?

Let’s try to forget for a moment that many top kayak brands are simply faster than other good or beginner kayak brands.

In general, and on flat clam water, kayak types break down from fastest to slowest:

So, that touring kayak category above falls right into our 2-2.5 knots, 30 minutes to kayak a mile range. Paddling a fishing kayak, you can expect to add 10 or more minutes to that time, which would get you a 30-40 minute 1 mile kayak paddle. And paddling a sea kayak will shave about 10 minutes off that time, for a 20 minute mile in a kayak.

Rotomolded, one-piece plastic kayaks, and Thermoform 2-piece plastic hulls tend to be slower than composite/fiberglass-hulled kayaks. In addition, the plastic hulls pick up imperfections, scratches, and gouges that all combine to reduce hull speed even further.

In general composite kayaks gain about a .5 knot advantage over the plastic (polyethylene) hulled recreational kayaks. But this speed advantage comes at a cost, literally.

Fiberglass/composite kayaks are much more expensive than the Rotomolded and Thermoform plastic hull kayaks.

But hull material isn’t the only factor that affects the different types of kayaks‘ ability to paddle 1 mile quickly.

We mentioned earlier that sea kayaks are the fastest kayak for recreational speed. But why is that? Well, in general, sea and touring kayaks are longer, have narrower beams, and their hulls are made from smooth composite materials that slice through the water.

Then that’s our next factor. Which is that all things being equal, longer narrow-beamed sea and touring kayaks tend to be faster than shorter, wide-beamed sit-in or sit-on-top recreational kayaks. And this is due to the differences in their length to width ratio as much as their hull materials.

But length to width ratios are another article…

Wind is probably the biggest weather factor in how fast you can expect to kayak a mile. And the lighter, shorter, and wider your kayak is, the more it’s affected by wind.

Plastic recreational kayaks tend to be easily blown off their tracking line by side winds. And this will affect how much forward progress you’ll make in a crosswind. In addition, a 10 mph headwind might add a few minutes to your 1 mile kayak speed. But a brisk 20 mph headwind is going to slow you down to almost a crawl.

The good news is, as long as the wind direction doesn’t change, coming back the opposite way, you’ll get a speed boost with the wind at your back.

This one caught my wife and a college friend of hers completely off guard. They’d rented sea kayaks and headed out away from shore at a nice leisurely pace, making great time. But when they turned to paddle back to shore, the outgoing tide made it almost impossible for them to make headway, even paddling furiously at probably 2.5 knots plus.

By the time they reached the beach they were both exhausted from what was probably about a .5 knot actual land speed. So, mind the tide. It’ll make your paddle faster or slower, depending on how you time it.

The reason is that if you’re paddling normally, 2.5 knots, and the river’s flowing at 2.5 knots, you’ll be travelling at 5 knots. Much faster than how fast you can normally paddle a kayak. And this is important for calculating how far and how long a downriver expedition will take you.

Conversely, if you’re trying to paddle upstream against a 2.5 knot river flow, you’re pretty much going to be paddling in place.

How Fast Can a Pedal Kayak Go?

Pedal kayaks are propelled by your legs instead of your arms. In general, most people have stronger legs than arms so they can pedal harder, faster, and longer in a pedal kayak than in a paddle kayak.

Obviously pedal speed will depend on the physical fitness and strength of the individual paddler, but pedal kayaks can go a little faster than paddle kayaks. In general, 3.5 to 4 knots is about how fast the average pedal kayak can go.

Some pedal-powered kayakers can get bursts of 5 to 7 knots, but sustaining that over the length of time it would take to kayak 1 mile would be difficult.

How fast can a Hobie kayak go? Hobie surveyed their users and found that the average speed of their Hobie Outback pedal kayak was about 3.5 knots.

How Long Does it Take to Kayak 3 Miles?

It’ll take roughly 90 minutes to paddle 3 miles in a kayak.

A 3 mile kayak isn’t something to take lightly. You’ll need some water and maybe an energy bar to keep up your stamina.

Back to the beginning of this article. I paddled the length of Pinecrest Lake, CA—3 miles total down and back—and it took roughly 90 minutes to paddle 3 miles. Give or take for the wind and me getting tired, of course.

How Long Does it Take to Kayak 10 Miles?

A 10 mile kayak adventure will require about 5 hours to complete. But that’s not the entire picture.

On any kayak trip over an hour, you’re not going to maintain a steady pace of 2 to 2.5 knots for 5 hours straight! You’ll take breaks, get a drink of water, and maybe just stretch your shoulders and legs a bit. A 10 mile kayak will take some planning, stamina, and snack breaks.

All of that will add time to your 10 mile kayak trip, so plan about 5 to 10 minutes per hour added onto that 30 minutes per mile pace.

link to What Are Kayak Scupper Plugs? Do I need them?

If you've ever paddled a sit-on-top kayak, you might've noticed the holes in the bottom of the hull. The first time I saw those kayak scupper holes, I wondered if I needed them and if I should just...

Learn More
link to Kayak Safety: How Safe Are Kayaks?

One of the things I love the most about kayaking is that it can be as safe or as adventurous as you want it to be. From leisurely paddling a flat calm lake to paddling the ocean, witnessing beautiful...